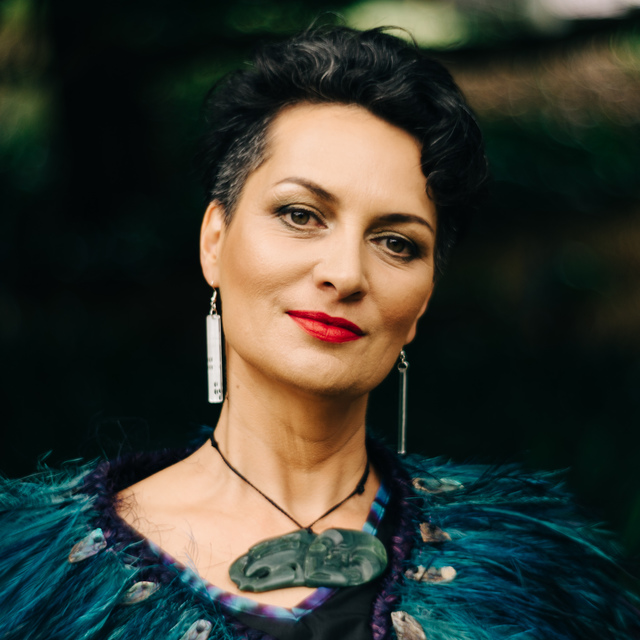 Ariana is a composer and performer of waiata in te reo Māori and English, as well as an exponent of taonga puoro. Although now living in Wellington, her music is inspired and influenced by her Kāi Tahu (Māori) ancestry and the dramatic landscape of Te Wai Pounamu – The South Island of New Zealand. Ariana began writing waiata in the Kāi Tahu dialect while studying at Otago University in the early ‘90s and started performing in 1993 with the folk group, ‘Pounamu’. She started her solo music career in the early 2000s and has become well known for her engaging live performances and critically acclaimed recordings. She has released three solo (Whaea, Tuia, and From Dust to Light), two collaborative albums, and several music videos, one of which (for her waiata ‘Tuia’) won an international award at the imagiNATIVE film + media festival in Toronto in 2009. She is also a member of the Christchurch-based Māori-Celtic themed folk group, ‘Emeralds and Greenstone’ and collaborates regularly with Alistair Fraser, and Ben Lemi Wood (Trinity Roots), and has also performed with Horomona Horo.

Ariana has been formally mentored by Dr Richard Nunns, and supported by Brian Flintoff, two of the people at the forefront of the revival of taonga puoro. She regularly includes taonga puoro in her live performances and recordings.

In 2015 Ariana was a soloist with the APO at the Auckland Arts Festival performing kōauau and singing a karakia for Kenneth Young’s ‘In Paradisum’. She co-composed with Philip Brownlee, the first concerto for taonga puoro, ‘Ko te tātai whetū,’ which she also performed with the CSO for its world premiere in June 2015. The concerto was based around a traditional mōteatea, which relays a southern version of the story of Hinetītama and Tāne. In 2016 Ariana was a featured singer in John Psathas’s epic international collaboration ‘No Man’s Land’.

In 2008 she was a soloist in the WOW Wearable Arts Awards in Wellington, and performed in the prestigious Pao Pao Pao event in the Wellington Town Hall where she was presented with an achievement award from Toi Māori. Ariana is also a published poet and writer.

for ensemble, voice and taonga puoro

for voice and taonga puoro, 4m

for ensemble, voice and taonga puoro

for voice and taonga puoro, 4m

for SSA choir and percussion, arranged by Nanako Sato

Let There Be Light

a soundscape and video to support an exhibition

a soundscape and video to support an exhibition, 39m 20s

a soundscape and video to support an exhibition, 20m 1s

a soundscape and video to support an exhibition, 25m 6s

a soundscape for an exhibition, 39m 9s

Ruby Solly: Precious are the Things (That Fly Without Wings) - VIDEO

Our Music From Her festival, held in mid-October, will celebrate, support and encourage diverse v...