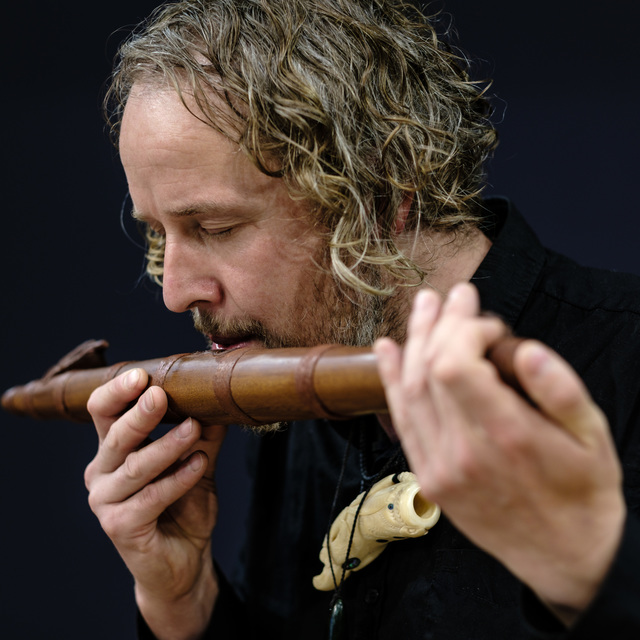 Alistair Fraser is a widely respected player, composer, and researcher of ngā taonga puoro with a performance background that enables him to provide a sensitivity that suits the intimate nature of these remarkable instruments. He has been researching, making, performing and composing with ngā taonga pūoro since 1999 and in his time has worked in a diverse range of art forms with Aotearoa’s top arts practitioners.

In 2018 Alistair toured the show Te Korekore with Chamber Music NZ during Matariki. He developed the show which included duo performances with double bassist Phil Boniface (Ponguru) and flutist Bridget Douglas (NZSO) with story telling by Rangimoana Taylor and video art by Ed Davis. Al Fraser and Bridget Douglas performed HineRaukatauri (Dame Gillian Whitehead) at Government House for the Arts Foundation Awards Ceremony in 2018 at the request of composer Dame Gillian Whitehead who received an Arts Icon award that evening.

In 2017, Alistair performed with Motu :: Oiléain (Trinity Roots with Irish Friends), STROMA, Bridget Douglas, New Zealand String Quartet, David Long and Natalia Mann (Utterance) and with the Waiata Māori Music Award nominated ensemble 'Auaha'. He is a member of ensemble 'Oro' who performed at the APRA Silver Scrolls 2017. His solo performances have gained wide acclaim. Alistair was a Wild Creations Artist Resident in 2011, a Churchill Fellow 2016 and is a researcher with Otago University.

In 2017 Alistair began his three year position as a researcher for Otago University looking at Moriori and Māori taonga pūoro from Rekohu/Chatham Islands. Also in 2017 Alistair was a kaiako (tutor) at a series of wānanga ‘Toku Reo, Toku Ohooho’ run by Horomono Horo, that focused on composing and playing with ngā taonga pūoro.

Other performances of note are Museums After Dark at Cambridge University Museum of Archaeology and Anthropology (May 2015) and a season of This Other Eden (October 2014) an opera by Anthony Ritchie to which Fraser contributed ngā taonga pūoro parts. In December 2014 Alistair toured with Ngai Tahu songstress Ariana Tikao and Richard Nunns. Alistair performed and composed works with Jeremy Mayall during Mayall’s time as Mozart Fellow at Otago University (2014-2015) producing four co-composed works by Mayall and Fraser, Along the River Run, He Korokoro Tui, Otakou Lullaby and Still.

for taonga puoro and keyboards, 4m

A collaboration with taonga puoro and percussion, 4m 39s

for taonga puoro and keyboards, 7m

for taonga puoro and ensemble

Join us to celebrate and resonate Māori Pasifika voices at Te Kōkī, in an afternoon of korero and...

As part of the [__Te whironui exhibition__](https://www.tewhironui.com/) we welcome the public to...

Te Wā Whakanui i a Matariki

Featuring the taonga puoro of __Alistair Fraser__ as well as live music and DJs from Shearwater D...