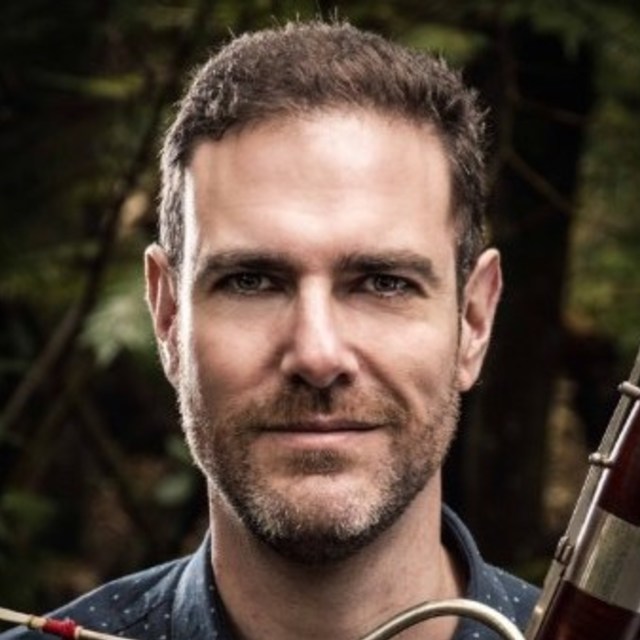 Ben Hoadley holds degrees in bassoon performance from the Sydney Conservatorium of Music and the New England Conservatory in Boston. He received a Master of Music in composition with First Class Honours from the University of Waikato where he was awarded the Lilburn Composition Prize, and has held fellowships to the Australian National Academy of Music, Tanglewood Music Centre and the Weill Music Institute at Carnegie Hall.

Since returning from the USA, Ben has divided his time between Australia and New Zealand, lecturing at the University of Auckland from 2007, and since 2019 at the Sydney Conservatorium of Music. He is regularly invited to teach at institutions throughout Australasia and abroad, including a residency at the University of Louisville, USA in 2017.

Ben's compositions include: the chamber opera Miss Brill, written in collaboration with Sydney playwright Craig Brush, and premiered at the Art Gallery of New South Wales in 2018 as part of the Resonate series; Huia for organ and orchestra, premiered by the Auckland Philharmonia Orchestra; Turakirae for clarinet and orchestra, premiered by Peter Scholes and the Auckland Chamber Orchestra in 2018 and recorded by the New Zealand Symphony Orchestra in 2020; works commissioned by the Sydney Omega Ensemble, Professor Jack C. Richards, and a bassoon quartet commissioned by the Sydney Symphony Orchestra's bassoon section that has been performed worldwide.

In 2020 he completed a string quartet (written with assistance from a Creative NZ grant) that was premiered by the Jade Quartet in Auckland; a work for solo oboe for Camille Wells (NZ/USA) and Shaiq Ahmad Noori (Afghanistan) through the Teach to Learn foundation in Boston; and the sextet Cave Dances, commissioned by Chamber Music NZ and performed at ten centres across New Zealand by principal players from the Auckland Philharmonia Orchestra.

Also in 2020, Ben was the winner of the NSW Flute Society Composition Grant for his work involute for flute and piano, and the SOUNZ Brass Composition Prize with Haratua for trombone and piano, which was premiered at the NZ Brass Band National Championships by David Bremner and David Barnard.

In January 2021, Ben's Four Preludes for piano quartet was premiered at the Akaroa International Music Festival by the Amio Quartet.

One of Australasia's most versatile bassoonists, Ben appears regularly as an orchestral player, recital and concerto soloist and chamber musician on modern and historical bassoons. His special interest in Australian and New Zealand repertoire has led to a number of new works for bassoon. These include a collection of pieces by Gillian Whitehead which he has recorded on the Atoll CD Arapātiki, a finalist in the 2014 NZ Music Awards. Ben has also recorded the CD Southern Invention featuring Australasian music for bassoon and piano. Ben premiered Alex Taylor's critically acclaimed bassoon concerto in 2014, subsequently performing and recording it with the New Zealand Symphony Orchestra. In 2017 Ben gave the Australasian premiere of Sofia Gubaidulina's Concerto for Bassoon and Low Strings with the Auckland Chamber Orchestra.

After a while only the green of the grass is left

for two clarinets and piano, 10m

for flute and spoken voice

for cello and piano, 10m

for two bassoons and piano

for bass clarinet and bassoon, 9m

for clarinet, viola and piano, 8m

for flute, bassoon and cello

Three Sketches for a Nocturne

for alto flute and piano, 7m

for alto saxophone and piano

for cor anglais and piano

for bassoon and chamber orchestra

for bass clarinet and bassoon, 2m

is there anybody in there?