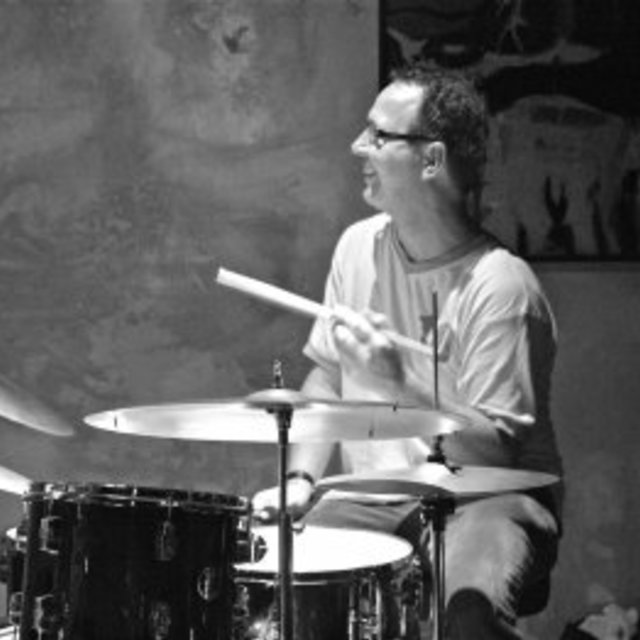 John Rae recorded his first album at the age of sixteen with the acclaimed Scottish saxophonist Tommy Smith and has subsequently recorded over 30 albums as a leader and side man including two BBC Jazz Albums of the Year (2003 and 2004). Before coming to New Zealand, John was one of Britain’s top musicians and band leaders. As a leader he has recorded The Big If Smiles Again, Celtic Feet, Beware the Feet, Magic Feet and Miraculous Meetings.

From 2000-2003, John was the drummer for the Scottish National Jazz Orchestra and in 2005 was awarded a prestigious ‘Herald Angel’ at the Edinburgh Fringe Festival. As an educator he has taught for many years and has a vast experience of running workshops and clinics.

In 2004 John formed a 35 piece ensemble Big Feet and was commissioned to write the music for a full performance. It was an amalgamation of a jazz big band with a traditional Scottish pipe band and a unique opportunity to mix two diverse musical styles. Big Feet was performed on the island of Islay (Scotland) with the Isle of Islay pipe band and went on to perform in Glasgow and Edinburgh concert halls.

John was appointed as musical director and composer for a specially commissioned and choreographed modern dance piece Off Kilter, which was performed at the Edinburgh Festival Theatre in 2010 and mixed Scottish traditional dancing with modern dance, hip-hop and traditional Indian dance.

John leads Wellington Jazz group The Troubles, who toured New Zealand in 2014 as part of the Chamber Music NZ Encompass series, and in 2014 and 2015 travelled to the Edinburgh International Jazz Festival. In 2016 they premiered John’s Where the Wild Clematis Grows, commissioned for WW100 commemorations, at the Edinburgh and Auckland Jazz Festivals. Other commissions include North to the Apricots (2016) for the New Zealand Symphony Orchestra/Wellington Jazz Orchestra and Happy for the Royal New Zealand Air Force Concert Orchestra.

An Eye for an Eyelash
Dejame

Hands On
It Starts with Silence
Just Me, Just Me
Marhaban

North of the Apricots

Storm in a Teacup
The Long Road Home

for jazz quintet and string quartet

Hey there, Mr. Grumpy Gills. When life gets you down do you wanna know what you’ve gotta do? Just...

John Rae 'Uncouth and Without Form'

I can live without a-lot of things. Music is not one of them. - Bill Gates Live from Meow, Un...

The Troubles ‘The Peer Gynt Suite’ by Edvard Grieg

“Don’t join an easy crowd; you won’t grow. Go where the expectations and the demands to perform a...