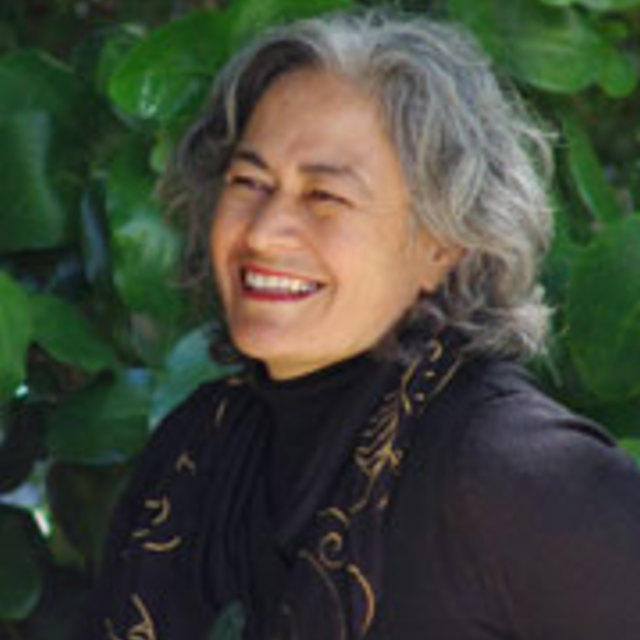 Aroha was raised in Rotorua and lives in Kirikiriroa (Hamilton) with her husband and three children. She was Professor and Dean of Te Pua Wānanga ki te Ao, School of Māori and Pacific Development, at the University of Waikato. Her PhD thesis, entitled ‘Hine!  E Hine! Rediscovering the Feminine in Māori Spirituality,’ focuses on the role of Atua wahine in Māori cosmology and the marginalisation of the Māori feminine in ethnographic writings and the modern colonised Māori community.

In 1992, Aroha was a Fulbright Scholar at the East-West Centre, University of Hawai'i at Mānoa.  She was a recipient of the Royal Society of New Zealand Te Rangihīroa Medal for current issues in cultural diversity and cohesion (for the analysis of the role of women in pre-contact Māori society through a close examination of Māori goddesses).

In 2000, Aroha was the principal writer for a proposal accepted by Te Waka Toi (Arts  Council) for the exhibition of ‘Hine! E Hine!’ held at the Rotorua Museum/Te Whare  Taonga o Te Arawa.  She curated and exhibited work for that exhibition, which acknowledged the legacy of the Māori feminine from time immemorial, as part of the Millennium celebrations.

Aroha’s love of song and dance has culminated in her involvement with kapa haka groups and in her participation in the recording of the CD/DVD, ‘Te Hekenga-ā-Rangi’ in 2003, alongside musicians Hirini Melbourne and Richard Nunns.  She has more recently been involved in composition and vocal work, such as for the soundtrack of the ‘Tau te Mauri Breath of Peace’ DVD, which won the Sonja Davies Peace Award in 2005; the film ‘He Oranga He Oranga Healing Journeys’ (2007), which was a finalist in the 2007 NZ Media Peace Awards and which received a Commended World Peace Film Award at the World Peace Film and Music Festival in Lucknow, India; and for the CD ‘Mauritau Peace’ (2007), which also received a Commended World Peace Music Award at the same Festival.  The most recent works she has completed for film was Earth Whisperers Papatūānuku, Water Whisperers Tangaroa.

Aroha’s research interests include karanga, Māori spirituality, Māori women’s arts and crafts, traditional Māori healing practices and many other issues pertaining to Māori women and the environment.  The world of the Karetao (Māori Puppetry) is an area of research which Aroha and others are entering into, in the hope of reviving interest in this ancient practice.