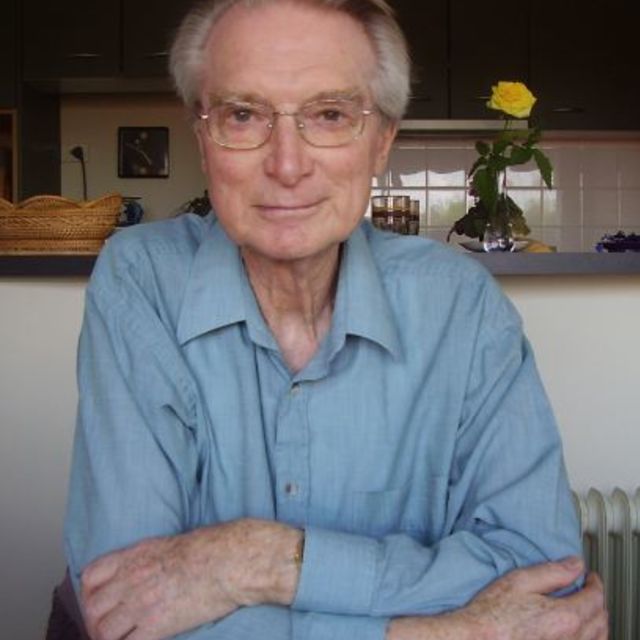 Hugh Dixon was born in Sydney in 1927. Since the age of 12 he has lived in New Zealand, with the exception of a stay of almost two years in Sydney between 1977-79. Educated at Hutt Valley High School, Hugh received his first musical experience in the school brass band, beginning on tenor horn, then on cornet and later, trumpet.

A primary school teacher for a year; Hugh also worked for a builder in Leamington, Cambridge where he built his house; he was a secondary teacher of music and general science nine years; a teacher of brass instruments for the Auckland Education Board twenty years; a part-time private teacher of brass instruments and music theory eighteen years. He was also a part-time professional trumpet player for seven years in the Symphonia of Auckland (now Auckland Philharmonia Orchestra).

In 1967 Hugh founded the Auckland Youth Symphonic Band (AYSB) and conducted it for 10 years. This was the first band of its kind in New Zealand – the only other wind band at that time being the NZ Navy Band. The group expanded in numbers (over 80) and in 1973 it was found necessary to form two divisions – a junior and senior. They still flourish, but the senior division is now called the Auckland Wind Orchestra (AWO).

Hugh Dixon was a tutor and conductor at the annual National Secondary Schools Orchestral Holiday Courses under the auspices of the Education Board for twenty years. He was the founder/conductor of the Phoenix Wind Ensemble (later re-named Auckland Concert Band)5. Hugh organised numerous chamber music concerts and also conducted during this period. He was the conductor of the wind ensembles at the Cambridge Music Schools 1982–84 and South Auckland Choral Society and orchestra in Handel’s Messiah 1982. Conducted a season of 31 performances of The Mikado at the Mercury Theatre, Auckland 1987, and the St. Matthew Chamber Orchestra’s three Summer Concerts 1987–89. It was in the 1987 summer concert that Hugh's work Song Celestial (in 3 movements for soprano and chamber orchestra) was performed with the composer’s daughter, Wendy, in the singing role.

Hugh Dixon became member of the Composer’s Federation of New Zealand and of the Fellowship of Australian Composers, but has not kept up their subs. Still a Member of APRA (since 1983), he was listed in New Zealand Who’s Who Aotearoa 1994 Edition.

Up until retirement from teaching, composing was spread thinly over the years – “busy with other things!” From 1988 Hugh held positions in The Theosophical Society (TS) of New Zealand, namely, National Lecturer, National Vice-President, National President. For many years a student of Eastern and Western philosophies, Hugh also lectured at the various branches throughout NZ up until about 2004. As well, Hugh lectured in T.S. Branches in five Australian cities (several times in Brisbane and Sydney), and once in a TS Convention in India (Chennai, previously called Madras), and at a TS convention in Brasilia. He was also the Editor of the Society’s quarterly magazine Theosophy in New Zealand for six years until 2006.

A Cantilena for Two

for soprano, horn and piano, 4m

for trombone and concert band, 13m

for clarinet and bassoon, 2m

for mezzo-soprano and piano, 13m

Horses on the Camargue

for soprano, horn and piano, 9m

Horses on the Camargue

Into the Silent Valley

It Takes Three to Tango

for SSA choir and orchestra, 7m

My True Love Hath My Heart

for soprano and horn, 12m

for clarinet and piano, 5m

for flute, violin, horn and cello

for flute, violin, viola and cello

for flute and string orchestra

Song of the Sea-Gull

String Quartet No. 1 - The Enchanted Garden

String Quartet No. 3 - Such is Life

String Quartet No. 4 - A Lute of Jade

The Blue Wrens and the Butcher-bird

for flute, violin, viola (or horn) and cello, 9m

The Mysterious Call of the Sea

for soprano and piano, 14m

To the Moon and Tears

for soprano, tenor and horn, 3m

for soprano, horn and cello