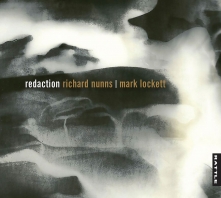 The inspiration for the recording project that led to the production of Redaction came from a documentary called Intangible Asset 82, which told the story of Australian jazz drummer Simon Barker and his journey to find the Korean shaman, Kim Seok-Chul. Barker’s journey led to the recording of a series of improvisations featuring him on drums, Scott Tinkler on trumpet, and Bae ll Dong on voice.

Artistic photographer Veronica Hodgkinson envisaged an artistic collaboration between sound and image that would eventually become the audio/visual exhibition Finding Time, which ran at Melbourne’s Brunswick St Gallery in March 2013. Her idea was to team her partner, jazz drummer Mark Lockett, with Richard Nunns to record a series of wholly spontaneous improvisations that would serve as aural soundscapes to which Veronica would respond by creating equally improvised images using light and photographic chemistry.

Both Veronica’s images and the music created for them by Richard and Mark (and later, Jeff) seek connections and commonalities through the non-verbalized, purely intuitive creative responses of each artist. The sound palette was deliberately limited, and the musicians sought an entirely unguarded musical directness, a creative honesty born of the moment and unmediated artistsic impulses.

for taonga puoro and percussion. Co-composed with Mark Lockett.
by Richard Nunns