Annea Lockwood: A Sound Map of the Danube - CD 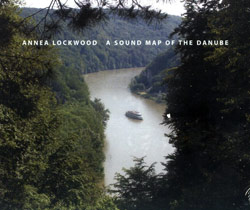 Annea Lockwood has been recording rivers since the 60s, “not to document them, but rather for the special state of mind and body which the sounds of moving water create when one listens intently to the complex mesh of rhythms and pitches.” Lovely Music, Ltd. released Annea's seminal work A Sound Map of the Hudson River in 1989. Nineteen years later, we are proud to present A Sound Map of the Danube, her largest river recording project to date. Recorded over three years and five trips to Europe, A Sound Map of the Danube traces the second longest European river's run from the Black Forest in Germany to its delta into the Black Sea. The recordings comprise sounds from the banks, from above and below the water, animals, insects, and interviews with people who live by the great river. The three disc set also includes a fold-out map with album notes and interview translations on the reverse side.