Dr Stephan Prock's work Stradivariazioni is a set of variations in which each variation captures his idea of a different violin by Stradivari and its unique character. The work was commissioned by Chamber Music New Zealand for Martin Riseley and Diedre Irons's 2011 CMNZ tour and has been released by Rattle Records on an album of the same name. Today's performance from the same duo will be the live public premiere of the work. Stephan is a Senior Lecturer in both Music Studies and Composition at NZSM, Martin an Assoc Professor as well as Associate Director and Head of Strings, and Diedre was Head of Piano Studies and Classical Performance Programme Leader until 2011. Rattle Records has newly become a division of Victoria University Publications.

Martin will also play a movement from one of his own compositions. Intermezzo for Lenny is from his Violin Sonata. This movement takes a saunter back to Martin's first years in New York, when the musical world there was dominated by the inescapable musical genius and legacy of Bernstein. Here the tiny unifying theme of this sonata is given an airing freed by Bernstein's liberating influence. Martin will be accompanied by Jian Liu, Lecturer in Piano at NZSM.

The remaining three pieces on the programme were all composed by Ross Harris who was, for many years, a lecturer in Composition at the School of Music.

Shtiklekh for flute/piccolo, soprano sax and piano was commissioned by Chamber Music New Zealand for the group 'Galvanised' – Rebecca Steel, Debbie Rawson and Diedre Irons – ahead of their CMNZ Kaleidoscope tour earlier this year. This will be the first opportunity for Wellington audiences to hear the work which is inspired by Klezmer music. Debbie is Head of Wind Studies at NZSM and Rebecca has been an Artist Teacher at the School.

Sunt lacrimae rerum is a quote taken from Virgil’s epic poem 'Aeneid'. In the poem, Aeneas walks through the city of Carthage and comes across a mural on a temple wall depicting a scene from the Trojan War. Aeneas, who fought in the war, is brought to tears by the painting and says, “There are tears in things, and mortality touches the mind”, a reminder of the frailty of the human existence, and the power contained in art. Ross wrote the piece especially for today's performers, Inbal Megiddo (cello) and Jian Liu (piano) after hearing them play together last year. Inbal is Lecturer in Cello and Classical Performance Programme Leader and Jian is Lecturer in Piano at NZSM. This will be a premiere performance of the work.

Three Sandcastle Songs by Ross Harris are a setting of poems by Panni Palasti. They will be performed by NZSM Classical Voice Lecturer and soprano Jenny Wollerman accompanied by Jian Liu. The three songs are: Invitation; Manifesto; and Kororareka Ruins and the poems were written by Panni when living in Russell, Bay of Islands, previously known as Kororareka. Ross wrote these settings for Jenny following her performances of several other works by him and this will also be a premiere performance of these songs. 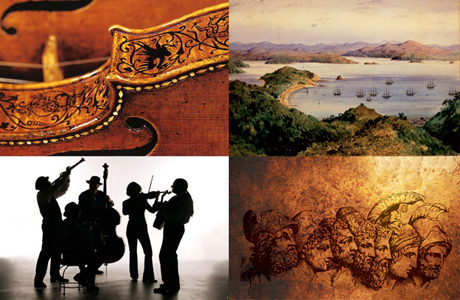 Filmed and edited by Chris Watson for the Resound project. Audio by Roy Carr.