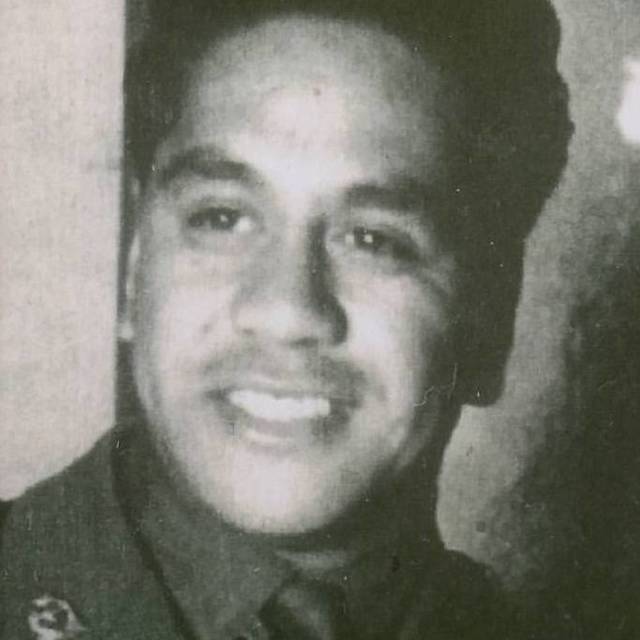 During WWII, Te Okanga was one of those young officers who had been commissioned in NZ (enlisted by putting his age up), reverted to the rank of Sergeant when shipped overseas. However, he was quick to impress, (by his decisive manner and genuine leadership qualities) his superior officers and he was returned to the rank of 2nd Lieutenant, posted to 'D' Company and later promoted to Major where through his many heroic feats Te Okanga earned one of the highest honours - the Military Cross. When WWII finished, Te Okanga and his two brothers Wi te Tau and Ranapia (Dick) Huata returned home. Te Okanga entered the Wellington Teachers Training College then subsequently returned to Ramoto to teach in Frasertown School then Raupunga District High School and later relieved in Hastings Intermediate.

During and post Te Okanga teaching career he involved himself in the promotional and managerial side of various tribal and national enterprises including Land & Environmental Affairs, Tourism, Runanganui, Taurahere, Mātua Whāngai, Rūnanga Wāhine and was a founding member of Kohanga Reo movement in the late 1970's and early 80's. He was instrumental alongside brother Wi in hosting a series of Hau Wānanga within the Tū Tāngata, Tū Ngāti Kahungunu programs designed to uplift his iwi and re engage his people within Māori language, history and culture. Tākitimu Marae was widely used for this program and many other positive initiatives where this became a full-time job.

After the passing of his wife Ngaro in 1981, Te Okanga Huata concerned himself with the social and educational advancement of the young Māori. This onerous and often itinerant employment was as a Community Officer with the Department of Māori Affairs in Hastings and later in the Wellington Head Office. This did not however curtail his numerous voluntary commitments but a cultural engagement in Samoa was a highlight.

In 1983, Te Okanga led Ngāti Kahungunu first hosting of the Polynesian Festival (Te Matatini) at the Tomoana Show Grounds, Hastings and Queen Elizabeth's powhiri in Nelson Park in 1986. Te Okanga also gave great support to the Te Māori Exhibition that toured the USA that year. Throughout his lifetime Te Okanga was taught by his father Reverend Hemi Huata and during a childhood illness was kept inside (while his brothers were rural farmers and hunters) and was taught by his father the whakapapa - genealogy for the Huata whānau and historical stories of wider tribal areas. Te Okanga was later gifted one of two Whakapapa books for the Huata whānau and was known for his knowledge and strength in Ngāti Kahungunu genealogy, language, history and culture. Te Okanga was a gifted orator.

Te Okanga was a beautiful composer of mōteatea (traditional chants) and waiata-a-ringa (melodic action songs). Some of his more know songs are: Ko Wai Ka Hua, Mōhaka, Ngā Tukemata, Te Māori e, Whakarongo a tai, Hinana, Nei te Hunga, Tokomauritanga, and Whakawhana mai ana to name a few. His legacy lives on in these songs and to those that knew him in life.

It was a grievous blow, when so soon after the Hastings Reunion of the Māori Battalion that at 2:30pm on April 6th 1988, Te Okanga Kahutapere (Aussie) Huata collapsed after his whaikorero, in front of 2000 odd people, who had gathered for the National Kohanga Hui, on Tauarau Marae, Ruatoki, Ngāi Tuhoe. Te Okanga did not recover from the massive heart attack he endured that day. A man whom had many more years to give to his whānau and people whom was kind, gentle, generous, creative, cheeky, talented and a true romantic. A man that was a good teacher, tribal leader and soldier.

"During the attack on Casa Bianca on the night of 14/15 December 1944, 2/Lt. Huata led his platoon in a determined assault on his objective, a heavily defended enemy strongpoint, which was finally captured after very severe fighting in which hand-grenades, light machine-guns and small-arms were used by both sides, the enemy suffering eleven killed. While consolidating his position, he and his platoon were counter-attacked by enemy infantry supported by four tanks which the enemy had laagered in another building close by. Appreciating that though he was without tanks or support weapons, darkness minimised the danger of enemy tanks, he ordered his platoon to hold on at all costs, during which time the enemy tanks opened fire about thirty yards away, reducing the top storey of the building to complete ruin. 2/ Lt. Huata, without regard for his personal safety, rushed forward to the side of the road and fired his bazooka at the leading tank which stopped, being disabled. He then fired at the tracks of the remaining three tanks which were then close behind the leading one, commencing with the rear-most one. Meantime the platoon engaged the enemy infantry who, realising that their tanks had been immobilised fled, leaving thirteen dead behind. During the whole of this action, 2/Lt. Huata showed courage of the highest order and the success of his platoon was due to his outstanding skill, initiative and inspiring leadership. (L.G. 21/6/1945(I)) The National Archives. Recommendation for Award for Huata, Aussie. (Ref. WO 373/12/656). Military Cross." AWMM