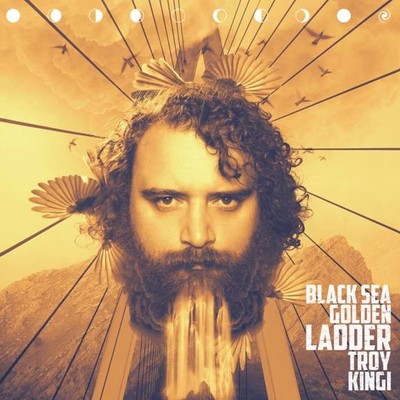 A collaboration with award winning Ōtautahi singer-songwriter and producer Delaney Davidson (who also plays a variety of instruments on the record), Black Sea Golden Ladder was written and recorded as part of Troy Kingi's Matairangi Mahi Toi Artist Residency in Wellington.

The residency was created by Toi Rauwhārangi in partnership with the office of the Governor General, to support the development of Māori and Pasifika visual arts and creative practices.

The initial concept of the album was to have poetry written by Troy, with all poems speaking about different facets and stages of life that the majority of humans could identify with. Each poem would be the foundation for each song in the album. Songs that would range from birth to sleep ultimately culminating in death.

"As it turned out - my poetry wasn't quite up to scratch and not where I wanted it to be, but we still had to create. So Delaney took it on himself to be somewhat of a shrink, digging deep into my memories, deep into my subconscious to find my own experiences of these different facets which in the end led us to this album," says Troy.

"It is the most personal of all my albums — the first one I feel that is truly about me."