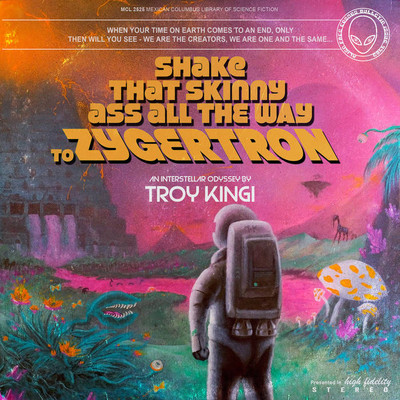 WHEN YOUR TIME ON EARTH COMES TO AN END, ONLY THEN WILL YOU SEE - WE ARE THE CREATORS, WE ARE ONE AND THE SAME...

This galactic Seventies-style funk album evolved from what Troy Kingi has been listening to over the last few years, especially Bill Withers, Shuggie Otis, Curtis Mayfield, Al Green and Marvin Gaye. Troy knew that he wanted an outrageous over the top album, and wrote down the most way out song titles he could imagine, all about being out in space. From there he went to the beach with his brother, and every night they would sit in their deck chairs, stare at the stars, and talk about one of the song titles.

Each night they discussed the back story of a song, and from there Troy wrote the album. It was never originally intended to be a concept album, but it turned out that way, with three main characters appearing throughout the lyrics, until they all became one. Some of the songs also turned out to be quite lengthy, but it was never intended, they were just as long as they needed to be. The result is a visual album, one where all songs are cinematic and powerful. It grooves, it slides, it moves in a way that just doesn't happen anymore.