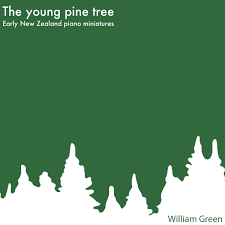 "When considering New Zealand composers, the name Douglas Lilburn stands out as a founding father figure. His contribution was immense, and largely through his influence and generosity new generations have taken their place in the front ranks of New Zealand composition. Looking further back, the picture becomes more obscure, with Alfred Hill standing out as perhaps the only recognised name. Further investigation, however, reveals an intriguing variety of composers whose music – both published and unpublished – has, for whatever reason, remained in libraries and music collections, largely unperformed and forgotten....

For my own recording, I've selected 27 piano miniatures by 21 composers of varying backgrounds. Some were NZ-born and spent their entire lives here, some emigrated here from Britain, while others were born here but spent the major part of their careers overseas. In casting the net fairly widely, I hope I'll be forgiven for including several composers who resided here for a comparatively brief period but who left a lasting impression. I've confined myself to the period 1900–1960, which is essentially 'pre- Lilburn', Lilburn and 'post-Lilburn'. It also illustrates (over a reasonably short timescale) New Zealand's musical progress from colonial imitation to a nation which speaks with its own voice."

for solo piano
by Henry Shirley

Many Things are Strange at First

for piano
by Douglas Lilburn in 1956

for piano
by David Farquhar in 1948

for piano
by Hamilton Dickson in 1944

for piano
by Douglas Lilburn in 1945

for piano
by Arnold Trowell in 1908