This concert is presented in association with Chamber Music Wanganui.

Prize-winner of the Michael Hill International Violin Competition, Amalia Hall, and beloved New Zealand pianist Stephen De Pledge come together for a concert of works by Mozart, Beethoven, Gershwin and Saint-Saëns. This is a celebration of the beauty of the violin and piano, and a chance to support New Zealand’s exciting young talent.

Concertmaster of Orchestra Wellington and violinist of NZTrio, New Zealander Amalia Hall has received widespread acclaim for her ability to move audiences with her “sumptuous and sweet tone”, inherent musicality and natural facility. At the age of 9 Amalia made her debut with the Auckland Philharmonia; in her teens she won all of the major national awards in New Zealand, including the NZCT Chamber Music Contest on two occasions and the Gisborne International Music Competition at the age of 16. She further won multiple laureate prizes at international competitions, including the Joseph Joachim Competition and Tchaikovsky Competition for Young Musicians.

New Zealand pianist Stephen De Pledge studied at the Guildhall School of Music and Drama in London, where he won the Gold Medal in his final year. After winning the NFMS Young Concert Artist Award he made his debuts in the Wigmore Hall, Queen Elizabeth Hall and St John’s Smith Square in London, and broadcast for BBC Radio 3 and BBC2 television. His concerto performances have included appearances with the Philharmonia, Bournemouth Symphony, New London, BBC Scottish Symphony and New Zealand Symphony Orchestras. His solo performances in recent seasons have taken him to Cologne, Paris and New York, as well as throughout New Zealand and Australia. 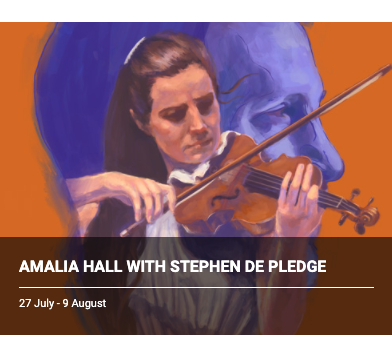 for violin and piano
by Gao Ping in 2020