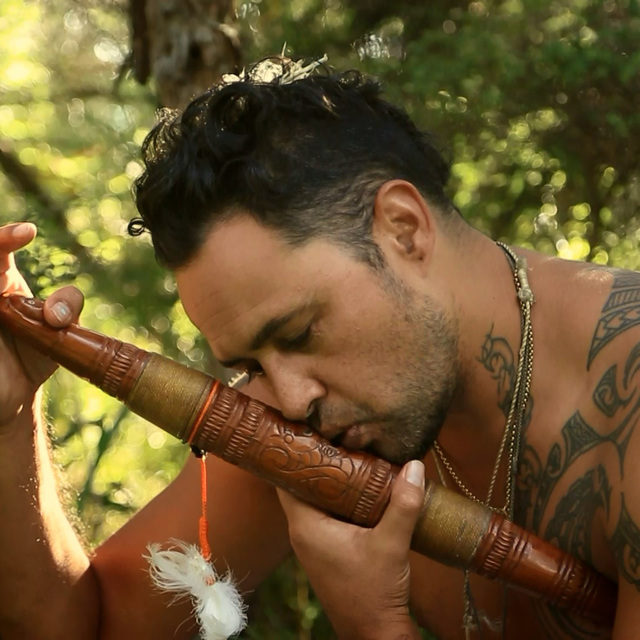 Grammy award winning soloist and Maori musical instrument specialist Jerome Kavanagh (Poutama) hails from the Mokai Patea, Maniapoto and Kahungunu tribes (Maori) as well as the Caomhanach clan (Irish). He was first introduced to the sound of Taonga Puoro by one of his aunties at the age of 16. A family owned Koauau (Maori cross blown flute) was the first instrument he recalls learning to play.
​
Maintaining his strong roots, Jerome has become part of a movement introducing Maori music, art and culture to the world. Over his career he has performed and recorded with artists across a variety of genres ranging from hip hop to classical. His collaborations include the Royal Philharmonic Orchestra, Moana and the Tribe, Daniel Beddingfeild, Hayley Westenra, Joler Gaan, Kevin Mark Trail "The Streets" and two-time Grammy award winning composer Christopher Tin. In Kia Hora te Marino, Jerome joins only a handful of New Zealand musicians as a featured solo artist and lyricist on the two-time Grammy award winning album Calling All Dawns, recorded at Abbey Road Studios in 2011. Jerome has performed at New York’s Carnegie Hall and Lincoln Center, the Sydney Opera house, the British Museum and Te Papa Tongarewa National Museum and was a selected member of the New Zealand Art Delegation at the 11th Festival of Pacific Arts in the Solomon Islands.
​
In addition to his performing career, Jerome is one of New Zealand’s most prolific Taonga Puoro workshop providers in schools. At present he travels, sharing his interactive live show "Power to the Puoro" with thousands of children in Aotearoa, New Zealand as well as at universities, museums, colleges, indigenous communities and sound healing events worldwide.

Jerome is the 2022 Creative New Zealand/New Zealand School of Music Composer-in-Residence and resides in the Lilburn Residence otherwise known as ‘The Magpie House’.

Auckland Philharmonia Orchestra | In the Elements