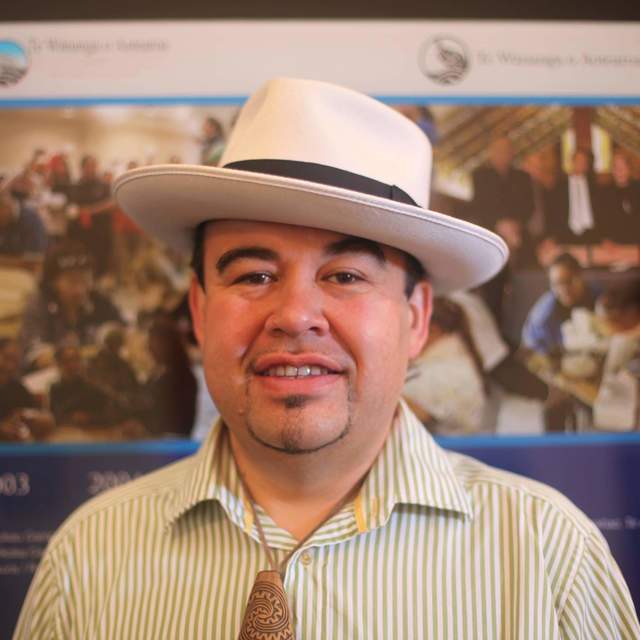 Paraone Gloyne is a prominent composer, orator and performing artist. Paraone, a graduate of Te Panekiretanga o Te Reo Māori, has long been dedicated to the revitalisation of te reo Māori and tikanga Māori. He has been involved in various initiatives at a tribal and national level. He is well-known for pioneering Mahuru Māori in 2014 to promote the speaking of te reo Māori in our daily lives. His efforts in this area saw him take home the Te Waitī Award for Te Reo and Tikanga at the annual Matariki Awards ceremony in 2018.

Paraone and his partner Ngahuia Kopa are the tutors and leaders of Mōtai-tangata-rau, a Ngāti Raukawa ki Uta based kapa haka that was established in 2005. The group made their debut at the Tainui Regional Competition in 2012 and went on to win the competition in 2014, securing a spot at the National Kapa Haka Competition, Te Matatini, in 2015. Mōtai-tangata-rau went on to make the top nine finalists at Te Matatini in 2017.

At the 2015 Te Matatini, Mōtai-tangata-rau were announced the winners of the trophy that recognises excellence in written and performed Māori language at the Festival, a testament of Paraone's excellence in composition. Paraone’s composition style has been termed fun and creative. He is well known for his witty play on words, his fearlessness when it comes to challenging contemporary issues and his ability to pull at the heart strings of the audience through his selection and placement of words married with a suitable tune, beat or rhythm. Paraone is also a kapa haka judge and the current Tainui representative on the Te Matatini National Board.