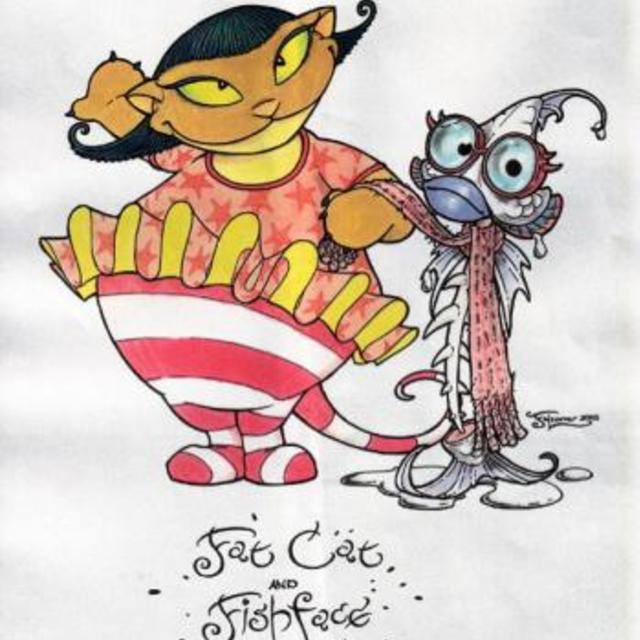 Fatcat & Fishface released their first album 'Horrible Songs for Children' in 1997. They wanted to see if there was a market for their weird and wonderful brand of music for children. The answer came back loud and clear.

Now they boast seven titles, including the successful compilation 'The Bestest & Horriblest Songs for Children' and 'Birdbrain', their tribute to the native birds of New Zealand.

Fatcat & Fishface's cheeky style has been compared to The Simpsons, Roald Dahl and Spike Milligan. They have won awards in New Zealand (a Tui for Best Children's album) and the USA (Children's Music Web) and their animated music clips have been invited to festivals around the world, and screen on television.

1 cm
Bat Fly
Big Moon
Bite
Black Socks
Death of a Guinea Pig
Deep Deep Trouble
Dinghy
Dogbreath
Eel
Emily Says
Fat-a-Cat
Fat-a-Cat (Reprise)
Fatcat & Fishface
Fatcat and Fish Fonk (reprise)
Fatcat and Fishface (reprise)
Fatcat and Fishface Fonk
Favourite Undies
Fingers
Flyby
Follow Your Nose
Fret Not
Frozen
Fruit For Thought
Get Well Song
Gimme
Happity
Hark
Holiday
How Does a Leg
I Never
I Won't Get In The Choir
Inish Itty
It's For You
It's For You (reprise)
Joe
Jump
Jump (reprise)
Lazy
Listen to Me
LittleAnimalEater
Living In The City
Magical Potion
Meanie
Middle of the Road
Moo
My Mother's Locked Out of the House
Noodle
Not Friend
Old Folk Dance
One Little Goat
One Step Forward
Pick Me
Planet Janitor
Pretty Ugly
Pretty, Sweetie, Happy, Lucky
Roadworks Chorale
Selfish Shellfish
Singalong
The Impossible Dancing Song
The Possum Waltz
The Wreck of the Diddley
Tip of My Tongue
Una Momento
Vegemite Spread
Waspital
We All Are Animals
Weather Report
Wonder Why
You Are What You Eat