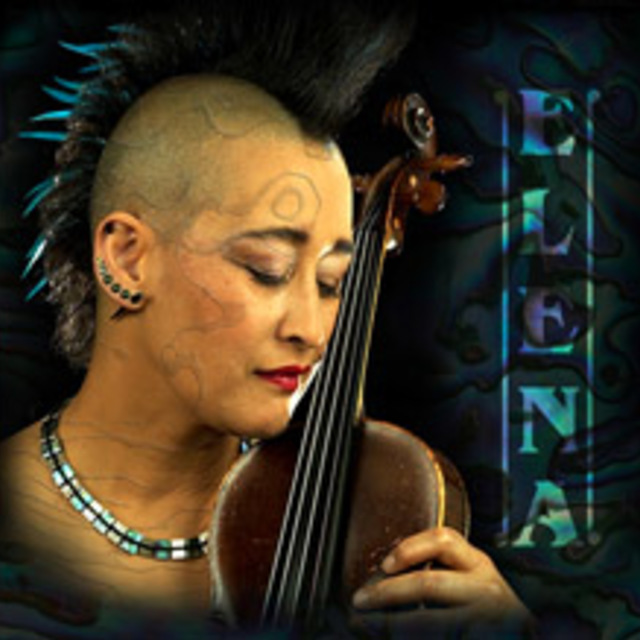 Described by Wellington mayor Kerry Prendergast as a “cultural icon”, Elena is one of the country's most talented and innovative violinists. Her ability to breathe new life into classical compositions by drawing on the musical and cultural traditions of New Zealand's first people, Maori, defines both her work and her reputation.

For example, Elena performs traditional Maori kapa haka (dance) with string quartet in place of rhythm guitar, and she plays with her string group 'Simply Fantastic' using traditional kapa haka as her rhythm section. The result: lively pieces that capture the imagination of audiences worldwide.

Elena's debut CD Elena, released in 2003, was noted by several members of parliament as “a musical taonga (treasure),” and an important contribution to the country's journey towards becoming a truly bi-cultural nation. It features spine-tingling renditions of Pachelbel's Canon, Tarakihi, He Tango mo Elena and Sway.

Elena is of Ngati Kahungunu/ Rongomaiwahine descent. She grew up with her Maori grandparents on the wild, isolated East Coast of New Zealand's North Island on the Mahia Peninsula. There, she was immersed in Maori culture and learned Maori waiata, before eventually moving down the coast to live with her mother and Dutch stepfather in Hastings. In Hastings, her musical influences were classical and it was there that she developed a deep love of classical music through attending concerts, learning to read music, and taking violin lessons.

In her late teens, Elena studied music at Wellington's Schola Musica, and - with talent and passion to burn - headed to London's renowned Trinity College.

In 1992, her career started anew when she joined the Wellington Sinfonia after raising a family and taking a ten-year break from performance.

Today, she continues to explore and blend musical traditions, while her audiences continue to enjoy the rich and eclectic results. Partners in her vision are some of New Zealand's top composers, musicians and linguists. They include Gareth Farr, professor Timoti Karetu, Te Ahukaramu Charles Royal, Tim Whitta, and her husband and producer Jan Nauta - all of whom took part in 'Elena's Cultural Symphony', a ground-breaking and unique symphony orchestral performance in 2004 that, again, meshed Maori and classical European musical traditions and that resulted in a 'live' CD Elena's Cultural Symphony Live.

Elena is a member of the Vector Wellington Orchestra and enjoys the versatility of a freelance musician. Elena regularly performs to general public, corporate, school and community audiences as part of her string group, the symphony orchestra, and as a solo performer. Elena is a violin tutor too. Her students range in age and ability and she takes great pleasure and satisfaction in teaching violin to children and young people with significant mental and physical disabilities. Every year, Elena donates her talent to raise money for causes including child cancer, women's refuge, Tsunami relief, Save the Children, SPCA, and Ronald McDonald House.

Elena's wonderful capacity to play with convention as a means to captivate and amuse is also reflected in her spiky, blue Mohawk and heavily pierced ears, from which gleam South Pacific gems such as pounamu (greenstone) and paua. She is a performer with personality and impact. And she astounds audiences and awakens passions like no other.

Maori television screened a documentary about Elena (September 2005) entitled 'Pushing the Boundaries' describing Elena's life journey leading to the concert. A sequel, 'Breaking the Barriers' will be screened on Maori TV this year.

for solo violin, tenor and Kapa Haka and orchestra, 7m