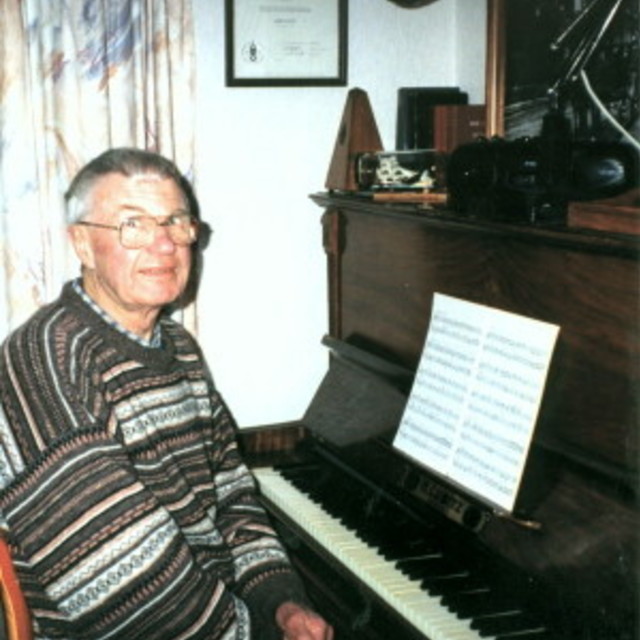 Born in 1929, Ian arrived in New Zealand from Scotland in 1974 with his wife and family. Although an architect by profession, Ian was involved in the promotion and performance of serious music over many years in both Scotland and New Zealand.

Further to commencing piano tuition at age seven and clarinet tuition at age fifteen, he attended six years of part time courses in orchestral and chamber music performance at the Royal Scottish Academy of Music. These courses were directed by Horace Fellowes, the former leader of Sir Thomas Beecham's first symphony orchestra and of the Scottish Orchestra. Regular opportunities for public performance were provided as part of the training. During his service in the armed forces Ian played solo clarinet with four Royal Air Force bands in various parts of Britain and eventually became conductor of one. He was also able during different periods of his service to play 1st clarinet with the St. Andrews University orchestra in Scotland and the Cardiff College of Music orchestra in Wales.

On completion of his National Service he joined the Glasgow Orchestral Society as principal clarinetist. He played in that position for fifteen years. He was on the management committee of the society during that time, president on two occasions and public relations officer for many years. The society, originally formed in 1870, was noted for performing a large part of the standard symphonic repertoire and for commissioning new works. It also undertook premiere performances of works by well known composers. These included a British premiere of an overture by Shostakovich, resulting in a letter of thanks from the composer. During this time Ian participated in recitals of chamber music. He was also a choir singer for twenty years.

In 1975, soon after coming to New Zealand, Ian joined the Upper Hutt City Orchestra under conductors Alan Foster and Kenneth Young. In addition to playing in chamber music recitals, Ian formed and conducted a small string group to play mainly Baroque music. At this time he was also involved with group teaching of the clarinet at Upper Hutt College, together with teaching that instrument to private pupils. Some years later he suggested the formation of the Upper Hutt Youth Orchestra and acted as its secretary and treasurer together with being a wind tutor. At this time he also started playing the bassoon.

In 1989 after retiring from the then Department of Education as Regional Architect, Central Region of New Zealand, Ian commenced to compose music. Originally this was to be used in the making of documentary films, an interest taken up several years previously. Soon however, composing became an absorbing occupation and he formed a wind trio which performed some of his music at three public concerts. One was at the Lower Hutt town hall in connection with the 1990 celebrations of the settlers arriving at Petone. The enthusiasm shown by the audience and by several individuals after the concert of the seven movement Otari Suite for wind trio encouraged Ian to continue composing. Before moving from Wellington to Dunedin in 1991 he deputised at short notice to play 1st clarinet at a concert by the Wellington Chamber Orchestra.

In Dunedin Ian continued to compose and develop skills in programming music directly by computer. He also produced printed scores and parts by that means. By the year 2003, fifty eight compositions were completed and fourteen of these had received public performances with one broadcast on Concert FM. Many of Ian's compositions are dedicated to his wife and family, relatives overseas and musical friends. For several years Ian was secretary and treasurer of the Dunedin Composers Group founded by Anthony Ritchie in 1990. He organised concerts of music by Dunedin composers, often with the collaboration of the University of Otago Music Department. These included a special concert held in the Dunedin Public Art Gallery during the Otago and Southland 1998 Sesquicentenary celebrations. He also arranged orchestral workshops over three evenings for fourteen Dunedin composers involving the Southern Sinfonia. In 1997, further to a need by the Composers Association of New Zealand (CANZ) for a composer to represent the lower South Island on the CANZ committee, Ian was approached and agreed to become a member. This was the first time the lower South Island had been represented since CANZ was founded in 1970. Ian organised the first annual general meeting of the association to be held in Dunedin which was during the Otago and Southland 1998 Sesquicentenary celebrations. He attended committee and annual general meetings in different New Zealand centres over four years, recruited new members for CANZ and wrote Otago regional reports each year about the activities of composers and concerts of their music in the region for the year book CANZONA.

Ian has produced four compact discs which contain selections of his instrumental and orchestral music.

for clarinet in B flat and pianoforte, 9m

Concert Overture - "Land of the Kea"