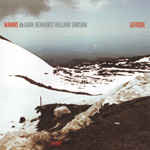 When I first heard Bernie, I think it was in the old Real Ale Café, Sydney, I was a young student, fresh from NZ. When I heard him play, I didn't know what to think. He wasn't slick like I was expecting. He was rough, robust, in your face, angular, melodic and incredibly beautiful - all at once. Well, I guess I wasn't ready then - but as I listened, played and grew as a musician, I came to appreciate and love his greatness, and always hoped I would play with him.

I mentioned this to Peter Rechniewski (Artistic Director, Sydney Improvised Music Association), who suggested I guest with Bernie's quartet, and that he though it was a really good idea. Well, Bernie didn't seem t mind, and the result of that is the recent CD Solar. Now this!

I love this recording, and how it came out. Latitude is the result of an invitation form the 2009 Wellington International Jazz Festival, who were keen to feature a NZ/Australian collaboration. I thought of Bernie straight away, and when he suggested Carl Dewhurst as the other Australian, I said 'Yes exactly what I was thinking!' Carl is one of the best musicians I know. A rarity of creative flow, stunning beauty and musical authority; a perfect complement to Bernie's robust melody. We teamed up with Paul Dyne and Reuben Bradley and had a great performance in Wellington. It was billed as The Australasian Project.

Next, I thought we should organise an Auckland concert. Thanks to Robert Constable (HOD Music, University of Auckland), we played in the University's 'Monday Night Jazz' series, featuring my good friends and master musicians Ron Samsom and Olivier Holland.

It was a cracker performance, literally the first meeting for us all. We had a quick sound check/run through - and bang, did the gig! Straight away things worked. Ron and Olivier hooked up and swung it hard from beat one - and here's another thing about Carl's greatness, his comping. He's right there, in the cracks - everywhere, listening, adding, building, giving, but never dominating.

The crowd were loving it - a great audience! Bernie and Carl were at their best and went for it, and I got in there, too, feeling very inspired by the beauty and intensity of their playing, and by Ron and Olivier's driving, sympathetic and creative support. I'm very grateful that Matthew Thompson, a sound student at the time, thought it was a 'good idea' to record the concert. His team did a great job. Steve Garden's mix and mastering are fantastic. Many thanks!