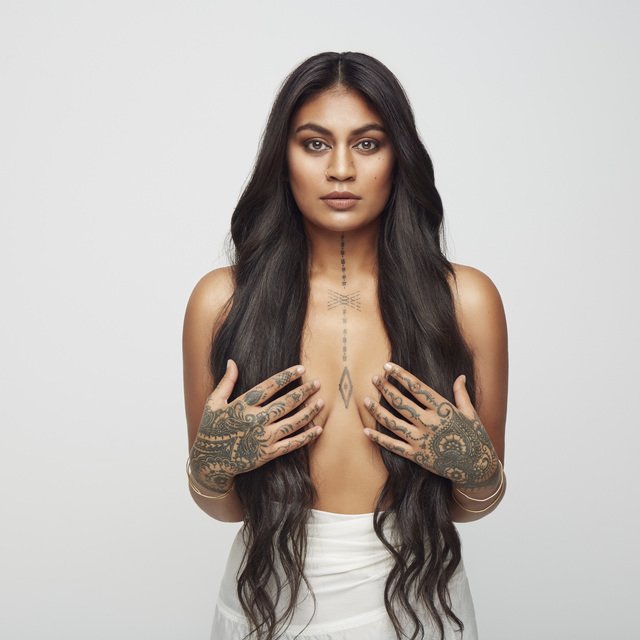 Aaradhna is a New Zealander of Samoan and Indian descent. Her father Jayanti Patel is an Indian from Navsari, Gujarat, India and her mother Sia'a Patel is Samoan. Aaradhna is the eldest of five. She first showed singing aspirations at the age of 11, singing along with her mother to traditional Samoan and country songs. She would try to imitate the songs she heard in Bollywood movies that she and her father watched and also went to festivals at which her father performed. Aaradhna began writing her own music at the age of 11, entering her first talent quest at the age of 13 and making it into the finals. She joined the school choir at Porirua College and went on to form a five piece girl group called Lovera.

Her debut album I Love You entered the top 20 RIANZ, with various songs featured in films including Sione's Wedding and It's a Free World. She released a club-inspired song alongside Australian producer, DJ and artist Paul Mac in late 2006 titled Love Declaration. The song features on Mac's album Panic Room and reached #31 on the local charts in Australia.

Aaradhna's album Sweet Soul Music, a throw-back to the soul classics including the Jackson 5 cover I Want You Back, was released on iTunes and in various music stores in New Zealand on 14 February 2008, coinciding with Valentine's Day. In 2011 she began working on her third studio album under Dawn Raid Entertainment. She released the single Wake Up in August 2012, and the album Treble & Reverb was released in November.

Aaradhna's fourth studio album Brown Girl was released in July 2016. The album explored her own experience of casual racism in New Zealand. The album debuted at number one in New Zealand and also cracked the albums chart of Switzerland. In November 2016, the performer gave away her hip-hop award at the 2016 New Zealand Music Awards, believing that she had "been placed in this category, because I'm brown". She opined that "you can't give a singer an award for Best Hip Hop artist".

I Love You
Back of My Mind
Betcha By Golly Wow
Bob's Your Uncle
Brown Girl
Burned It Up
Can We Go Back
Celebration Flow
Cool Shoes
Crying Like a Wolf
Devil's Living In My Shadow
Didn't I (Blow Your Mind This Time)
Diggin' Your Love
Down Time
Drunken Heart, Smokey Mind
Empty Hall
Faith
Fire Burning Love
Forever Love
Great Man
I Don't Know
I Love You Too
I Wish It Would Rain
I'm A Fighter
I'm Never
I'm Not the Same
I'm The One For You
Keep My Cool
Knowing You
Lorena Bobbitt
Messin Around
Miss Lovely
Please Say You Do
Secret Lover
Shake
Sit With a Slouch
Talk Sweet To Me
Treble and Reverb (Intro)
Under The Blue Moon
Wake Up
Warrior
Welcome To The Jungle
Why
You Don't Love Me Anymore

AARADHNA | I'm the One for You - AUDIO

AARADHNA | Talk Sweet To Me - AUDIO

AARADHNA | Under The Blue Moon - AUDIO

AARADHNA | Welcome to the Jungle - VIDEO